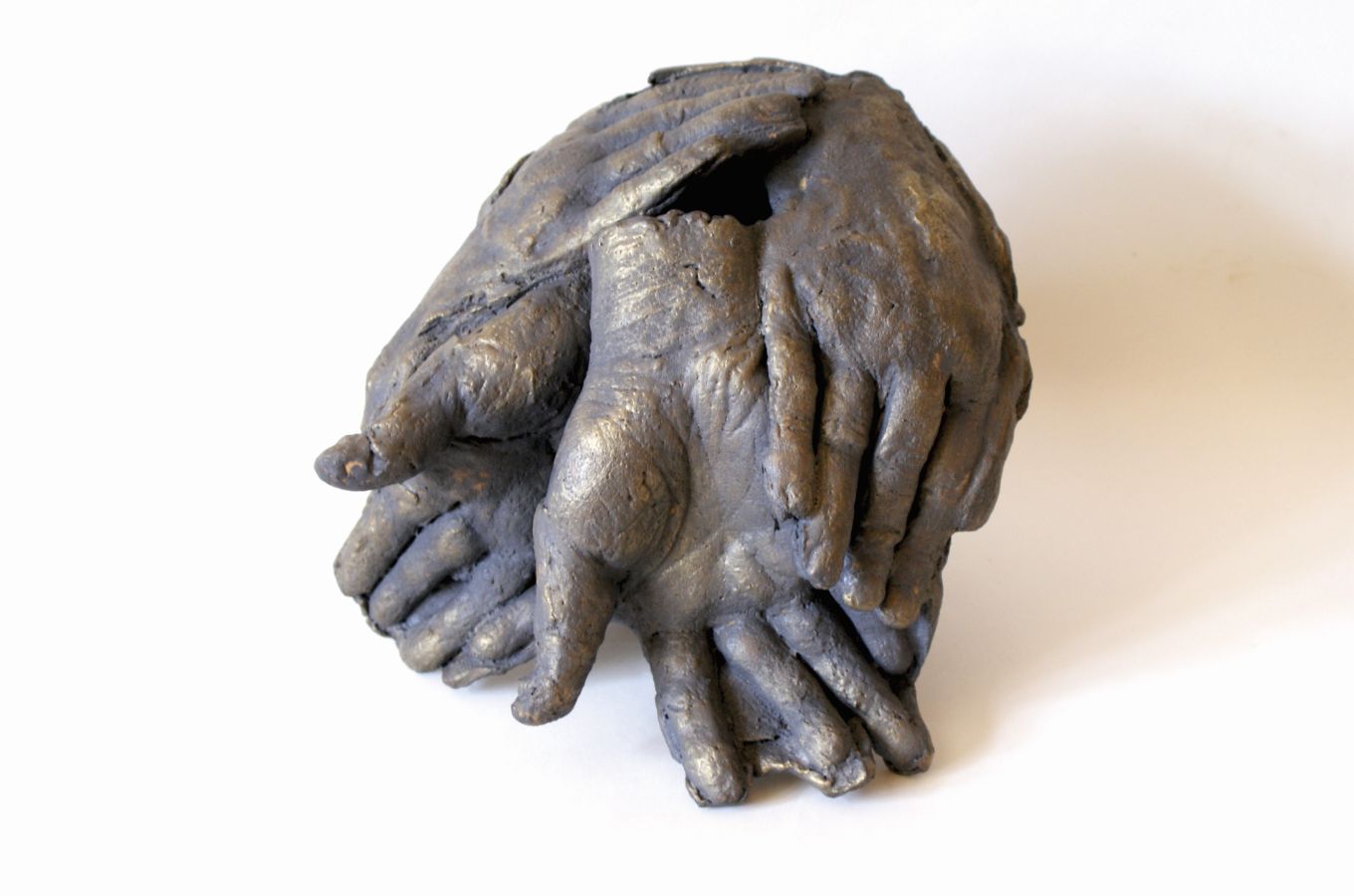 Artist’s Hands by Eva Lapka is a striking piece. Tragic and poignant, it is at once an offering and a plea.

The element of hands is a common subject matter that appears in the œuvres of almost every sculptor, from Rodin to Nauman. In the art of Eva Lapka, it is a recurring motif, carrying with it a depth of meaning. The hands in her sculptural works are at once symbolic of the medium she has dedicated her career to – clay – as well as humanity in a universal and transcendent sense. Linked or separate, they are vestiges of the past as much as the present, and ultimately they represent the artist herself.

Lapka is a professional artist in the true meaning of the word. Marrying two careers, that of teacher and ceramic artist, she is highly respected in both fields. Born in Brno, then Czechoslovakia, she has been living and working in Montreal since 1968. She has exhibited extensively in Canada and abroad, and continues to show her works on a regular basis.

Her art is unique and original, beautifully sculptural, a mix of figurative and abstract expression impossible to categorize. What strikes the viewer instantly, however, is the emotional component of her pieces. The labour intensive process involved in the creation of ceramic works is as primordial as it is sensuous, the artist’s hands in constant tactile dialogue with the material.

Although Eva claims to avoid the narrative in her three-dimensional compositions, they nevertheless offer myriad interpretations, and her lyrical titles give away the underlying message each work encapsulates.

She speaks eloquently of her art: In the practice of my work, I feel as though there is a journey between light and dark – every step of the creative process involves adding or removing light and shadow.

Eva is a master potter, and her glazes can be at once sumptuous and unbearably delicate. With such virtuosity in handling the medium, she is able to mold works that transcend the notion of sculpture, combining great fragility with powerful visual expression. Elements of time and memory, space and matter, all are encompassed in her artwork. Series upon series of works mark her prolific career, each taking her creative development further and further.

The hand motif is like a signpost on this journey, appearing in a variety of compositions, and at times, on its own, as in her mural entitled Traces, which adorns the facade of the Visual Arts Centre in Montreal where Eva teaches.

In Artist’s Hands she ‘borrowed’ the hand of her friend and fellow artist Léo Rosshandler. It is a striking piece. Tragic and poignant, it is at once an offering and a plea. The interlocking palms resemble a flower opening to the sun, but another view provokes a different reading as the composition shifts to a purely visual stance. It takes a truly audacious artist to engage in such a pictorial experimentation, for there is something both disturbing and compelling in this relatively small work. Tactile, it is a kind of objet d’art, were it not for myriad echoes that resonate through it.

And again, as is the hallmark of all she does, Eva creates a dialogue between the viewer and the work; but before any of that was possible, she had to commune with the piece in her own personal space. Being molded from the hand of a close friend imbues this work with yet another dimension, for in some alchemic way, the spirit of that person is now intrinsic to the piece. It attaches an aura of intimacy to the artwork, making it doubly personal, precious. Yet despite this fragility, both physical and emotional, Artist’s Hands is far from sentimental in its expression, and neither is Eva Lapka. For all the pain and turmoil she endured in her personal life, she stands tall, unwavering in her creative vision, in the art that accompanied and sustained her throughout.

Beyond the visual punch this work delivers lies the world of pure matter, the masterful handling of the stoneware and glaze, which turns it from a realistic representation to a raw sculptural composition. The negative space in Lapka’s works is a universe onto itself, and the unfinished edges of the sculpture reveal as much as they suggest. l

Czech ceramist of international reputation, and a highly respected teacher, Eva Lapka has a degree in sculpture and ceramic design from the School of Arts in Brno, Czechoslovakia. Born in 1944, she immigrated to Canada in 1968, with her artist husband Milan. Since 1991, she has been teaching at the Visual Arts Center in Montreal, where she has been the head of the ceramics department from 1999 to 2013. She has exhibited across Canada, as well as in the United States and Europe. Her artwork can be found in numerous private and public collections, including the Montreal Museum of Contemporary Art. In January 2012, she was appointed Member of the Royal Canadian Academy of Arts.