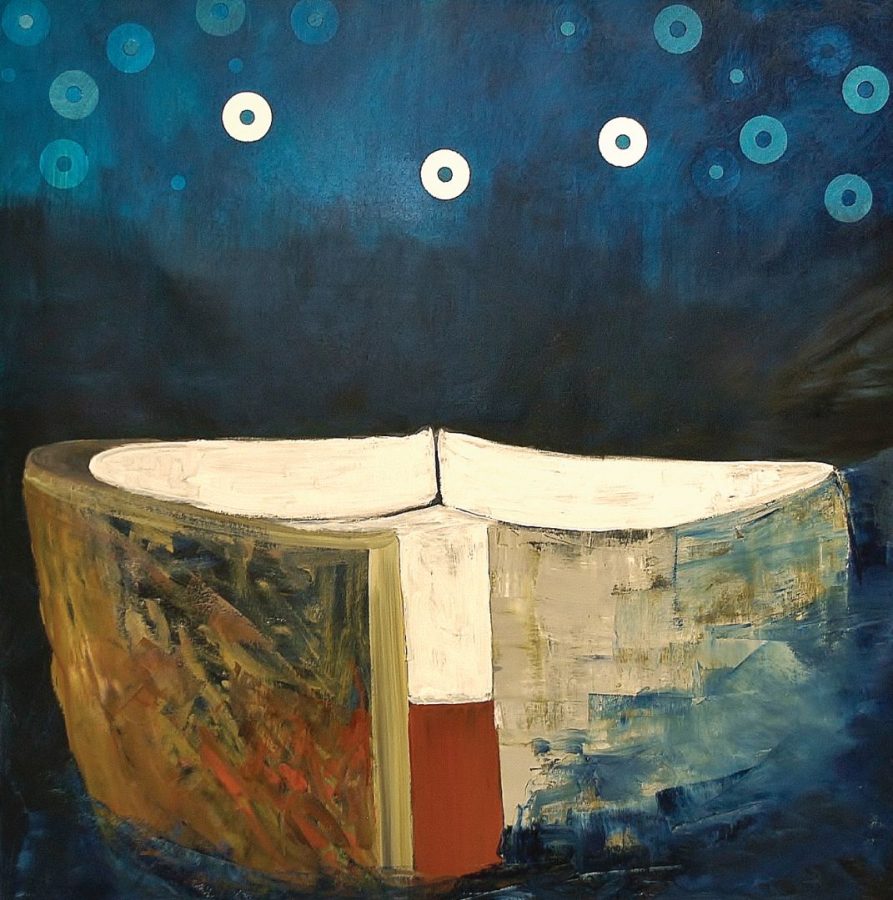 Painter Daniel Oxley is an embattled humanist. It’s not an easy role to inhabit in an age of accelerating anti-intellectualism, with its repugnance for history and its suspicion of the transformative power of luminous language and redemptive imagery. And yet Oxley seems wonderfully unperturbed by this darkening and dispiriting background against which, like the rest of us, he lives and works.

Oxley, who is now sixty-four, has been teaching throughout most of his career — a discipline he does not regard (as so many artists do) as punitive. He has been teaching — and teaching with great success, if those “rate-your-professor” online tallies are to be believed — at Concordia University in Montreal for the past thirty-three years. He and his wife now live in an immense, light-filled house they designed themselves in the woods north-east of Kingston. The Gananoque River flows implacably below their balconies — and beside Oxley’s spacious, exemplary studio. We met there a couple of weeks ago to look at his paintings and to chat.

“Each moment of painting is a constant moment of discovery,” he tells me. But, as he points out, the trajectory of that discovery isn’t always easy to control or interpret. I very much like the paradoxical idea of a “constant moment.” I also like the idea of work tinctured, in this manner, by a certain permissible and indeed welcomed ambiguity of procedure. Oxley assures me that once a painting is well and truly begun, anything can happen to it (“I work from ideas,” he says, “not from images”). His practice reminds me of a couple of lines from W.B. Yeats’ poem No Second Troy (1916), in the sense that his paintings trade in beauty that is “…like a tightened bow, a kind/ That is not natural in an age like this,/Being high and solitary and most stern…”

Actually, Oxley is capable of saying things not many other artists would admit to: “A painting,” he remarks, as we sit sipping our tea, “has to befuddle me.”

This befuddlement, when it happens, appears to be immensely rewarding. I have referred to Oxley’s paintings as literary. But by that, I do not mean they tell stories. On the contrary, these strangely dance-away paintings ultimately withhold the very narratives they seem, in the beginning, so insistently to provoke.

Take the exquisite Walcott’s Hounds (2014). The Walcott of the title is of course the poet Derek Walcott (who died March 17 of this year); the title also alludes to Walcott’s autobiographical poem-sequence Tiepolo’s Hounds (2000) — which contains lines like “Air! Air and Light! A privacy externalized.”

But while Walcott’s lines may have ignited Oxley’s foray into the painting (“I used them to get started,” Oxley tells me), they do not program it. There is a cave-like configuration in the painting, one of many in the artist’s work, from which there appears to be a strong, earthy, horn-like protrusion, vectoring out onto the seascape all around (I haven’t seen such compellingly painted water since Arnold Bocklin’s Isle of the Dead from 1886 — in which, by the way, the landforms are remarkably similar to those of Walcott’s Hounds). But the cave isn’t in Walcott. Nor is the dark, thrusting member. How to interpret the painting? Actually, I wouldn’t. Oxley mentions, in passing, the idea of Christ’s leaving the tomb, the stone having been rolled away. Yes, all that can be folded into the work. But it doesn’t explain its joyous inexplicability. “Paintings are not to be cracked open,” Oxley insists. I’m with him.

Miners Pond (from 2013-14) takes its title from Anne Michaels’ second book of poems (Miners Pond, 1985), but does not of course illustrate it. If the poem and painting somehow echo one another, it is only because they both deal with issues touching upon migration, dislocation, the transitional. The painting is dominated by a vast, slabby, beautifully-brushed boat-shape, floating on a stygian, blue-black sea, under a literally watchful sky (three stars have here become three staring eyes — which may be benign guides, like Jesus’s three wise men, or shining nodes of challenge). The boat is another kind of cave (haven, receptacle, basin, yoni, womb) as well: a boat is just a cave on the water, with its open side facing up.

Among Oxley’s most stirring, most majestic paintings is his remarkable Broken Ground (2015-2016). The work is based, if that isn’t too slavish a term, on Goya’s Vagabonds Resting in a Cave from 1800.

Clearly, there are no vagabonds resting in Oxley’s cave. “When I see a person in a painting,” Oxley notes, “I cannot enter that painting.” What’s left is light, a great leviathan-shaped thrust of it coming into “the cave” from the right.

The huge picture (198.12 cm x 304.04 cm) is an epic unfurling of virtuoso brushwork and paint-handling, all marshalled into a disturbing and breathtaking reading of inside and outside, of the hidden and revealed, the permitted and forbidden, mystery and understanding. Perhaps it even evinces the uneasy confrontation of the darkness of the unconscious (the deep-personal, the semi-inscrutable) with the effulgence of revelation.