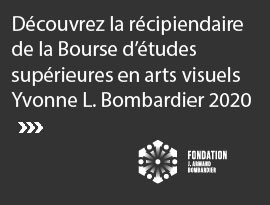 Born in Newfoundland in 1962, Dale Roberts is an artist in sculpture, fabrics and textiles, installation, conceptual media, and performance. His new show, scheduled to open January 9th 2014 at the Memorial Gallery on the Grenfell Campus of the University of Newfoundland, comprises an installation of his classical, fabric and textiles sculptures in one gallery, with a second show featuring the accoutrements and individual pieces relating to his cross-dressing, performance art, conceptual media persona, ‘Dame Mailarta,’ in an anterior gallery. The show is curated by Ingrid Mary Percy, DipFA BFA MFA and Assistant Professor in the Visual Arts Program of the Grenfell Campus. Percy’s decision to curate a show of this scope is rooted in Robert’s links with the Newfoundland campus and its progressive culture, “Dale Roberts was a member of the first graduating class in the BFA Visual Arts Program at Grenfell Campus in 1992.”

Dale Roberts’ ‘straight art’ consists of both large-scale and small, knitted, woven, crocheted and constructed sculptures based on nautical seafaring culture and industries in his home province of Newfoundland. Sourced in his childhood as the son of a fisherman, evocative of the sea in terms of visual effect, they are also often redolent of the sea; Roberts ‘anchors’ certain pieces offshore, in shallow water, to be battered, pigmented, added to, and seasoned by ocean tides. Some are large scale, others small wall pieces collectively known as the ‘Distorts.’ The larger pieces are reminiscent of nautical vessels, fishing nets, buoys, floats, ship bumpers, and other seafaring icons. The smaller pieces resemble nothing so much as intimate, organic structures hailing from the human, animal, and vegetal realms. Robert’s ‘other’ body of work comprises a separate oeuvre all its own. As if emanating from another, additional life and career, this corpus relates to his cross-dressing, performance art, conceptual media persona, ‘Dame Mailarta.’ With felted wool, fabric effects, collected trinkets and found objects, Roberts fashions the icons of pop culture-loving drag queens everywhere – Cher, Marilyn, Dame Edna, Lucille Ball, and Her Royal Majesty the Queen, herself. Roberts’ ‘Dame Mailarta’ performance persona can be readily compared to the transvestite alter egos of artists through history, from Rosa Bonheur to Duchamp, Frida Kahlo to Kent Monkman.

One of the earliest artists to assume a cross-gender persona as part of their artistic identity, French Realist painter Rosa Bonheur (1822-1889) received permission from the police to wear male attire on her forays through the countryside. Painting animals and rural scenes at such male- dominated places as horse fairs and slaughterhouses, Bonheur has received much scholarly attention for her gender-bending lifestyle. In recent years she has been celebrated as a queer pioneer, feminist icon, and role model for the lesbian community. Duchamp named his cross-dressing persona Rose (later to become Rrose) Sélavy. In 1921 Man Ray collaborated in the only issue of the New York Dada magazine ever to be published, with a photograph he had taken of Duchamp as the seductive Mm. Sélavy wearing a stylish hat and an elegant fox neckband. Frida Kahlo (1907-1954) periodically wore male garb, a practice documented in photography from her teens. Kahlo has been hailed in contemporary Queer literature as a masterly and magical exponent of cross-dressing. In one famous and dramatic self-portrait, she confronts the viewer somberly from a wooden chair, wearing a man’s suit. She has a pair of shears in her hand, and sits surrounded by her freshly shorn hair.

Monkman’s style of cross-dressing mischief is more overtly political than Dame Mailarta’s, who really just wants everyone to participate in the world-wide creation of mail art and put it in the post. How is inciting everyone to engage in international, artistic co-operation and mount a mail art insurrection not political? You’d be right to ask, for of course it is, if somewhat more subtle in approach. The laughing exterior that ostensibly proclaims (in so many winks, charming prompts, and dramatic sweeps of the feather boa) that ‘girls just wanna’ have fun’ is a clever ruse. Beneath that expertly applied makeup lurks a very determined arts activist – a chick who just wants to get her hands on your proffered handiwork – a damsel not to be evaded or put off by claims like “I’ll get it to you later.” Smilingly, winningly, she-who-must-be-obeyed persists, until you find yourself sticking small images onto diminutive, mail-able backings, attaching attractive stamps, and sending them off to ‘the Dame.’

Roberts’ ‘gallery of all sorts’ studio (transported in its near entirety for this show) is the stage setting for an astonishing multitude, and mind-boggling range, of transformations. Ken and Barbie dolls go through various disreputable metamorphoses in great profusion, and other ‘dolls’ peer from magazine pages and countless, original art postcards. Signed celebrity photos are arrayed alongside kitsch, Canadiana, and 50s memorabilia, and all have the strangely alluring disquiet of a circus funhouse. A Chinese dragon, AWOL from the New Year’s Day parade, explodes into raucous laughter every time the merest sonic stimulation triggers it into hilarity, and – if I remember correctly – there are those spooky, antiquated Jack-in-the-Box toys lurking about. Memory becomes unreliable, as the sheer, prolific magnitude of Roberts’ studio complex tends to overwhelm the senses and induce hallucinations. If there’s anything one’s sense of slightly twisted ‘fun’ misses in the alternative reality of Dame Mailarta’s ‘Full-On Immersion Experience,’ one’s over-stimulated imagination simply supplies it and files it among the addled annals of memory and nostalgic desire.

Energized, inspired, and a little giddy, one reels out into the light of day (or dark of night) and nurses a sort of ‘sudden exit from the Fairy Hill’ hangover, with the nagging feeling one has just made a lot of magical, new friends. Certainly, the intimate likenesses of these pop-icons, divas and queens contain animus (or, more precisely, anima). One leaves the ‘Gallery of All Sorts’ convinced that, in some alternative universe, much closer than one might suppose, ‘they live!’