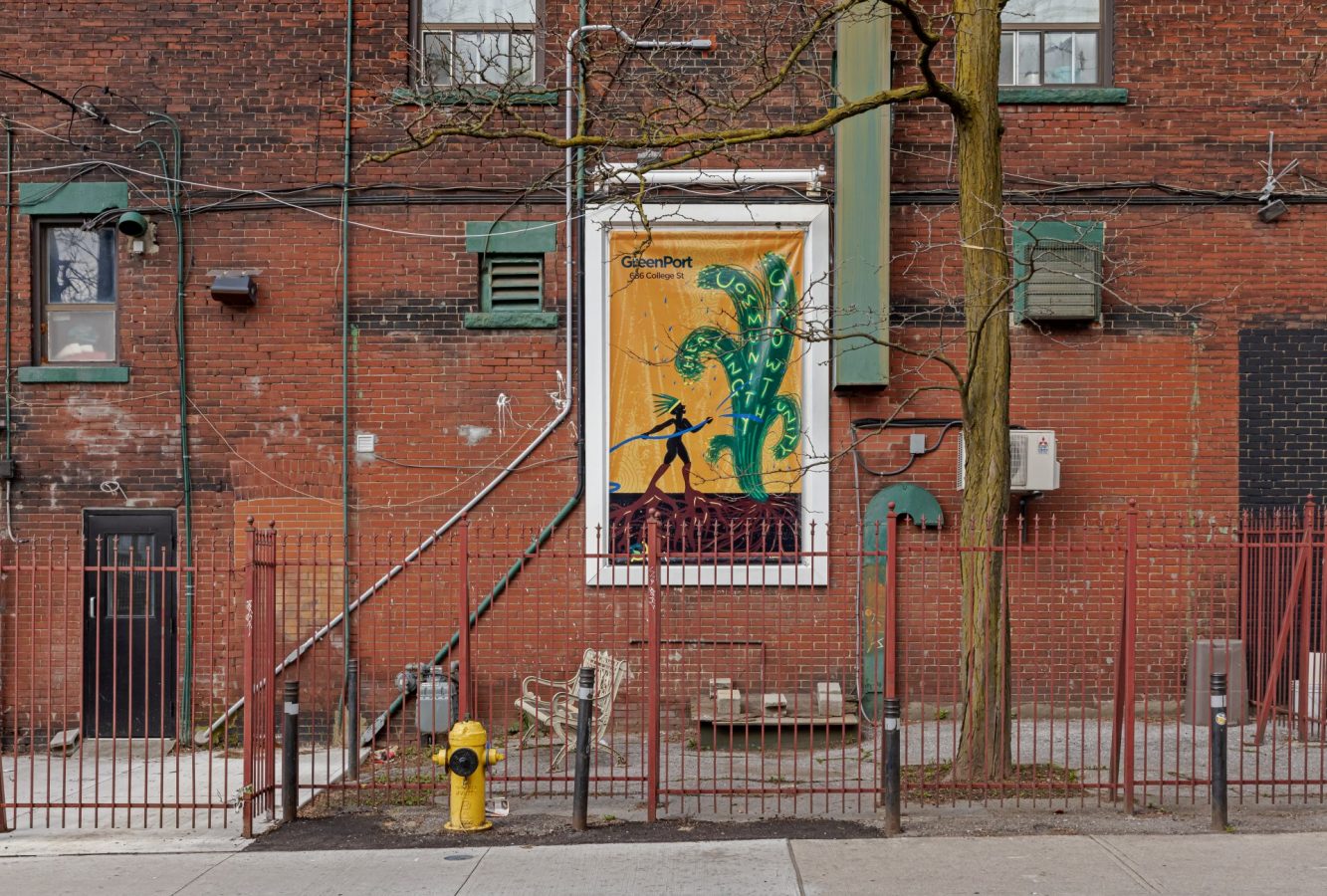 Rejecting the Modernist ideal of separating art and life, Pop artists of the 1960s looked to advertisements and other forms of popular culture for inspiration. Among their source materials was the billboard, a medium with the power to transform the landscape and influence its audience. In the view of art historian Harriet Senie, it was the “strategies of Pop, calling on the viewer to decode the message” that set the tone for artists’ billboards. Contemporary galleries continue to incorporate permanent billboard spaces within their regular rotating programs. Mercer Union’s SPACE, a billboard intended to function as an outdoor exhibition venue, is installed on the east side of the contemporary art centre’s building, visible to pedestrians and commuters travelling down Toronto’s busy Bloor Street West.

The legacy of artists’ billboards and their capacity to activate the public realm is still strong. SPACE has hosted eleven artists, including Walter Scott and Joi T. Arcand, since its inception in 2014. On display until August 14th is Functioning Circuits, a four-part series of images produced by the Black Artists Union (BAU) in collaboration with Black-owned local businesses that opened last year during the COVID-19 pandemic. The first instalment, Functioning Circuits: Aunty Lucy’s (November 2, 2020–February 8, 2021) depicted a hand holding a juicy burger against a white backdrop, a promotional image associated with a local burger shop. The second instalment, Functioning Circuits: BAU Buys Bitcoin(February 15, 2021–April 3, 2021) was a cropped image of a Greater Toronto Area map with a ubiquitous internet blue design. The sign announced the collective’s purchase of Bitcoin, a decision aligned with its “desire to seek tools for self-sustenance” and to “incorporate the value of Bitcoin into their functioning circuit.”

The BAU’s latest addition, Functioning Circuits: GreenPort (on until August 14) with its bright daffodil-yellow background and overlay of dandelion-yellow broad brushstrokes is striking. The markings are reminiscent of ocean currents on a map or beetle carvings on a barkless tree trunk. In the foreground is a Black female figure wearing a green-and-gold headdress. Her legs morph into thick roots that are firmly planted in the ground to become a part of a larger rhizomatic root system connected to a gigantic green plant that bursts from the soil and towers over her. The woman waters the plant, and the words “healing,” “community,” “growth,” and “unity” glow brightly on its leaves. At the top of the composition is a bold text that reads “GreenPort 686 College St.” This powerful image is the manifestation of BAU member Kanna Anigbogu and his interpretive illustration of the ethos of GreenPort Cannabis, a Black-woman–owned business.

Functioning Circuits also reflects the BAU’s community organizing efforts over the past year and a half. Shortly after Toronto’s first COVID pandemic lockdowns, the collective pivoted from its regular programming to initiate a community fund. All proceeds went to establish a micro-grant program to support emerging Black entrepreneurs and creatives, with priority given to Black women and Black LGBTQIA+ folks for development of a new product, service, or business.

Functioning Circuits is BAU’s declaration of independence and a community call to action to work toward self-determined communities that are autonomous from institutions and systems that continue to fail people, especially those who face marginalization.

Accompanying the Functioning Circuits series is a text by BAU members Ekow Stone and Filmon Yohannes offering further insight into the series’ framework. It is styled as the journal entry of a fictional archivist writing in the year 2115 who recalls a conversation with a community elder forty years earlier. The dialogue paints a picture of the year 2075, in which communities are self-sustaining and have their own economies. Money is described as “energy” that is aligned with the ecosystem, which “cannot be created or destroyed” and “can only change form.” New concepts such as “future ancestors” and fictional movements called “The Great Transition” and “The New Wave” are discussed. The exchange concludes on the subject of decentralization with mention of “Zim,” a non-fictional reference to the current use of cryptocurrency in Zimbabwe. With the Zimbabwean dollar demonetized in 2015, Bitcoin has been described as a “liberation tool,” offering the people a currency independent of central banks and government. In BAU’s prospective future, it is suggested that communities acknowledge that decentralization is only a means of survival and not a sustainable solution to today’s inequities.

The collective’s series strategically uses the billboard for what it does best: capturing the public’s attention and communicating a message. Functioning Circuits is BAU’s declaration of independence and a community call to action to work toward self-determined communities that are autonomous from institutions and systems that continue to fail people, especially those who face marginalization. It strives to foreground and actualize a new reality.

(6)  Adam B. Levine, “In Zimbabwe, Crypto Is a ‘Liberation Tool’: Bitcoin in Africa, Part 1 of a New Document Podcast Series,” CoinDesk, March 21, 2020, https://www.coindesk.com/bitcoin-in-zimbabwe-part-1-of-a-new-documentary-podcast-series.