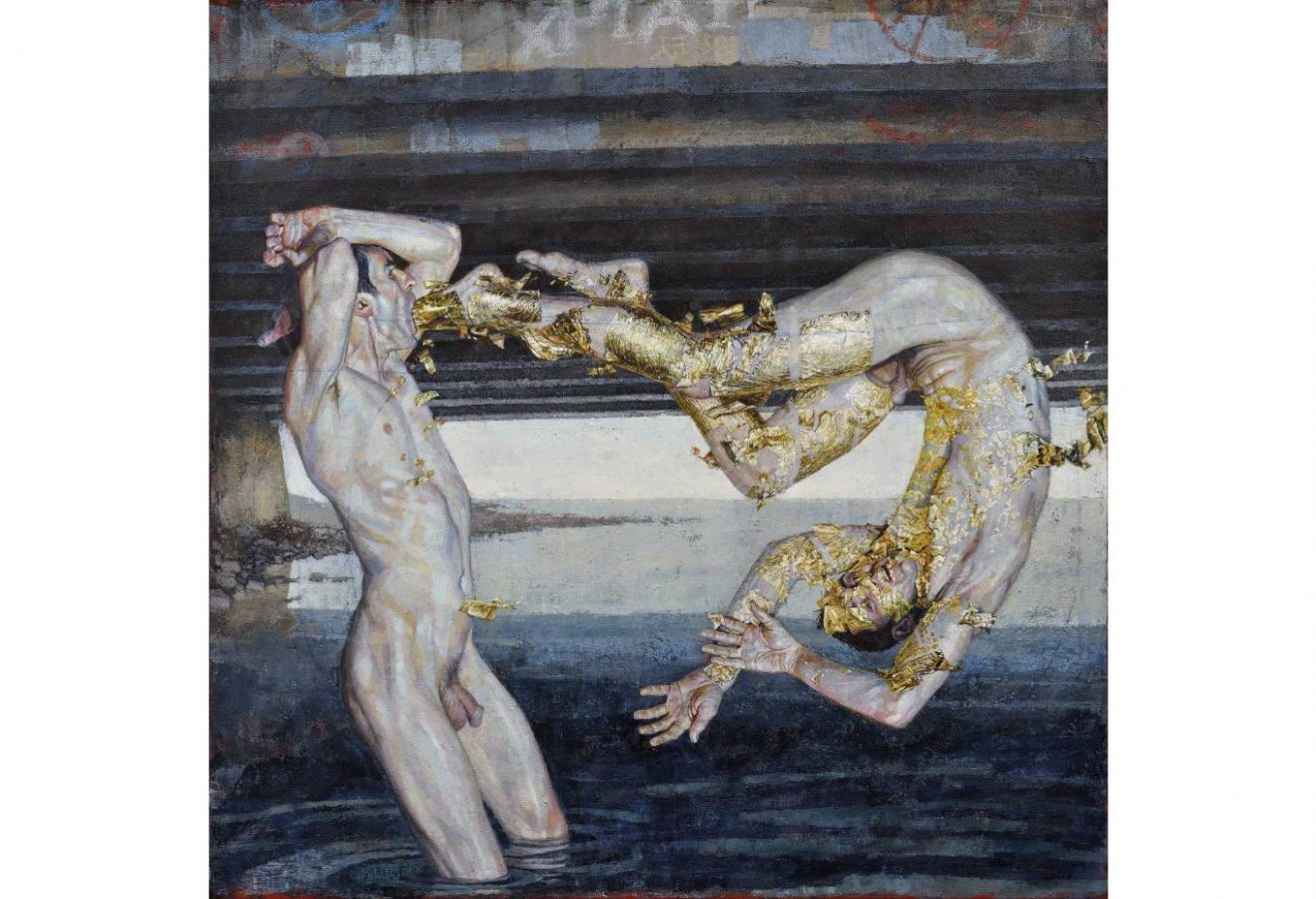 For years now, I have followed the career of Daniel Barkley. From his densely populated mythological scenes, through series of nudes in allegorical settings, to his latest production, which steadily continues on an upward curve.

Born in Montreal in 1962, Barkley graduated in fine arts from Concordia University, an institution that has released an inordinate number of highly talented artists. Barkley is no exception. He has been exhibiting in Canada, the United States and Europe, and can boast many faithful collectors in all these places.

He is a painters’ painter, in profound symbiosis with his tools and material, and a master draughtsman, which is evident in his treatment of the naked human body.

His most recent exhibition showcases three different series of works, and while reaching for familiar visual lexicon, is nevertheless a harbinger of a new exciting pictorial development in Barkley creative process.

This three-pronged show begins with medium-sized paintings of a young man, nude but for a tutu, roughly constructed, scrunched from black plastic netting. Barkley’s fondness for accoutrements takes over in this series, trivialising the allegory of the tragic and randy Faun. If the idea was to hint at a dance macabre, it too, got lost in the odd coupling. What was interesting was the contrast of the boy’s pale and delicate skin with the sharp plastic, and of course one cannot but marvel at Barkley’s handling of the medium when painting skin and sinew.

Not straying far from his favourite themes, Barkley next offers 7 large-format pieces on the subject of Exorcism. The action is taking place in dark, knee-high, and presumably chilly water, under a wrought-iron industrial bridge, and is repeated in varied configurations in each painting.

Two nude male figures look at first glance to be wrestling, but what is actually happening is that one of them is expectorating the other; the process is almost complete, only part of a foot is left in the mouth of the man in the throes of exorcising his “other”.

These are violent and beautiful scenes. The pale bodies against an angry sky and water, the disturbing action taking place. The person being ejected (egested?) is adorned with gold leaf that resembles shimmering scales, vestiges of beauty falling away.

The setting is contemporary as is the pictorial treatment, but as is the case with all of Barkley’s work, the underlying message is just as powerful as the visual execution.

Literature and myth, Classicism and Antiquity, all converse in his brushstrokes, and while it’s easy to get lost in the nudity, it is impossible to dismiss what hides beneath it.

Explicit as the paintings are, they are barely flirting with the homoerotic, focusing instead on the powerful, dynamic composition, and bold presentation.

Leaving the best for the last, the gallery shows Barkley’s Lazarus series, and here is where the departure from the expected – in the highest sense, as of a great artist – begins. Gone are the tutus and gold leaf. Gone is the scenery. A solitary figure stands before the viewer, naked and silent, eyes closed. Whitewashed with dripping pigment that cakes his hair, he awaits his awakening. Unaware, he is resigned, still.

In some works, eyes tightly shut, he attempts some hand gestures, but this is not a plea, not a pose, perhaps a last vestige of life, movement.

The most striking of these paintings is a closely cropped portrait of the models face, and this Lazarus is screaming. He is hollering and drooling both paint and saliva. Against a black background, this primal scream reverberates across the gallery. What horror does he bring from Hades?

Verging on hyper-realism, this work speaks of a new energy and a new approach. Its power lies first and foremost, if not entirely, in the masterful execution. It is no easy feat to paint paint…

I am waiting for the day when Barkley will have no more need for his accoutrements and mythical titles. Whether Eros or Apollo, or plain Joe, it is all in the way he paints.